During the 1750s an instrument commonly called the “guittar”  became immensely popular in Britain. This was not a guitar as we know it today but a close relative of the cittern:

“Although the guittar came in a variety of designs, most of the surviving examples share the following features: a pear-shaped body with a flat back and a string-length of 42cm; six courses of metal strings, the bottom two being single-strung and the upper four in unison pairs; watch-key tuning, which replaced peg tuning; twelve chromatically placed brass frets; and as a means of transposing song accompaniments, holes drilled through the fingerboard between the first four frets, through which a capo tasto could be fixed” (Coggin 1987, p. 205; see also Armstrong 1908, pp. 5-24, Walsh 1987 and the interesting video by David Kirkpatrick at YouTube).

In the decades before the 1750s plucked string instruments had been totally out of fashion. Only since 1756 a 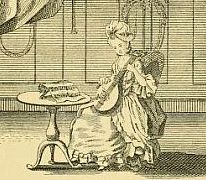 n immense flood of books containing music for the “guittar” was published in England and Scotland and it remained in use for more fifty years. During the early years of the 19th century this instrument fell into obscurity and was then replaced by the new six-stringed Spanish guitar.

The following text in attempt at a history of this instrument. Much of the information used here is taken from contemporary newspaper adverts which were immensely helpful, especially those from the  17th – 18th Century Burney Collection Newspapers. Throughout this work I use the term “guittar”, with two “tt”-s, that was common for most of the time. “Guitar” with one “t” also occurred regularly but not so often. The term “English guit(t)ar” came into use only late in the18th century, mostly to distinguish it from the Spanish guitar. The guittar was of course also quite popular in North America (see Rossi 2001) but I had to leave that out and limit myself to the development in Britain.

In the first part I will deal with the instrument’s introduction in 1753 and its history until the early ’60s. The major protagonists are the actress Maria Macklin who was the first one to play it on stage, Mr. Thomas Call, the first known teacher of the guittar and instrument maker Frederick Hintz who may have been its inventor. Additionally there is a brief overview of the guittar literature published between 1756 and 1763. The second part includes a short account of the history of the guittar until the end of the century as well as chapters about the so-called “Piano Forte Guittar” and about the music teacher and instrument maker Edward Light. Part III is an extensive bibliography of the guittar literature published until 1763 while Part IV offers some biographical sketches of musicians who have written music for this instrument.

This entry was posted in Historical research and tagged guitar history england. Bookmark the permalink.